Muiswerk: A user-friendly dashboard for students and teachers

This case study is also available as download (PDF, 2MB).

The educational landscape in the Netherlands is complex and under constant change. The same holds true for the growing market of digital learning materials.

With 3.300 locations and more than 650.000 active users, Muiswerk is one of the most popular providers for educational software in the Netherlands. The main reason for this is their wide range of exercises that match the student’s’ individual skill level.

However, good content is no longer the only aspect that matters to schools when choosing educational software. Ease of use and the visual appeal of a product also play an important role when it comes to maintaining and growing one’s market position. 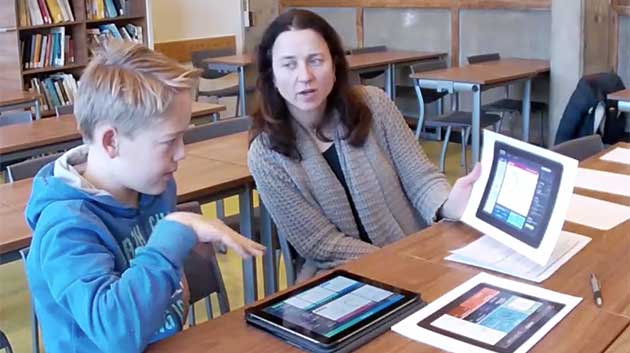 Research sessions were streamed online for the entire Muiswerk team to watch right from their own desks.

1. Ease of use as a distinguishing feature

Muiswerk is aware of the growing importance of a good user experience. In 2016, the company decides to push their learning platform to the next level.

“UXkids stands out because of their profound knowledge of the Dutch Educational system. We speak the same language, which was the reason that Muiswerk and UXkids were a good match from the start. Being able to completely understand each other was very important for us in a partner. UXkids are fun and very flexible to work with. They were able to grasp the essence of our application quickly and impressed us by effectively simplifying what is a very complex system.” (Bram van Tongeren, Managing Director at Muiswerk)

Where in the past the company’s main focus was on expanding their content and developing new functionalities, this project is all about the child- and user-friendliness of the product:

Muiswerk reached out to UXkids as a partner for (1) planning and conducting user research in different schools, (2) translating user insights and ideas to a new concept and interaction design and (3) a new look & feel for Muiswerk Online.

UXkids is specialised in designing and optimising child- and user friendly software. Companies often lack the necessary distance to their own products in order to make objective design decisions. UXkids brings just that distance to the table, helping the team to look at the details and at the same time not lose sight of the bigger picture. 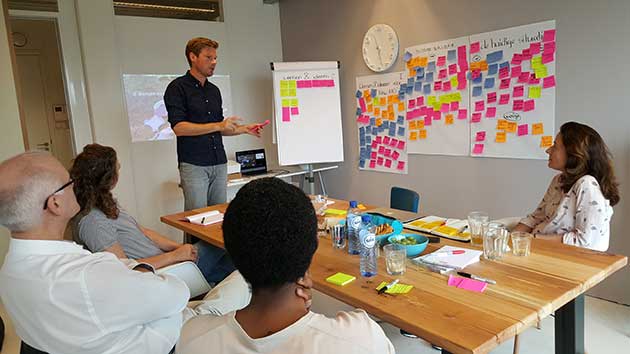 During an interactive kick-off meeting, Muiswerk and UXkids discussed the vision for the product and determined the scope for the project.

Together with Muiswerk and their users, UXkids defined the following targets for the new Muiswerk Online platform:

UXkids was responsible for the following tasks:

Within four months, Muiswerk and UXkids succeeded in going from a first idea to a clearly defined plan of action for the new Muiswerk Online platform. Due to the close collaboration with Muiswerk, UXkids was able to bring together the broad knowledge of different team members in order to get to the best possible result.

3. What UXkids has to offer 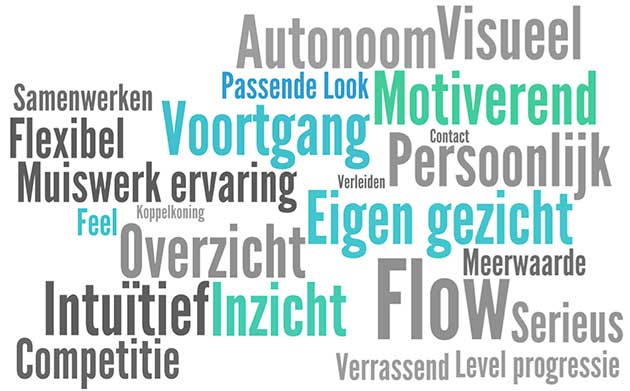 Besides a clear vision, Muiswerk also had a good idea about the technical and organizational preconditions for the new Muiswerk Online platform. This internal experience and knowledge about the platform formed the starting point for the new concept. Besides the ideas that Muiswerk had, the users’ needs and expectations were key to this phase of the project. By reordering existing features and combining them with new ideas, UXkids was able to simplify the existing Muiswerk Online platform. This way, the many possibilities of Muiswerk Online became more accessible without making concessions to the flexibility of the product.

UXkids is an expert on the UX (user experience) for kids and has many years of experience working within educational settings. This expertise allowed UXkids to translate the concept to the screen, with a clickable prototype as the result. The goals and expectations of the different users were leading throughout this process.

A visual design lets a digital environment come to life. It defines the look & feel and the recognizability of a product. The visual design also supports the interaction design by adding a calm and consistent appearance and by guiding the user’s attention.

The visual design was created by Greenberry in close collaboration with UXkids. During design decisions, UXkids was responsible for warranting the needs and expectations of the users. 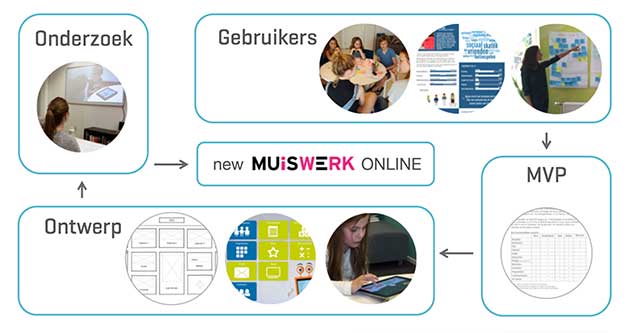 UXkids beliefs in User/Child-Centered Design. Users are involved throughout the diff erent stages of the design process by means of qualitative user research.

The key to a good user experience are the users. This sounds simple enough, but unfortunately a lot of companies don’t see this connection yet. At Muiswerk, however, the user has always played a central role. Yet, it remains a challenge to funnel user feedback and draw sound conclusions based on it.

Based on an initial user research, UXkids created user persona’s making the similarities and differences between the different user groups tangible. Through focus groups and user tests, UXkids involved users at different stages during the design process. This way, UXkids could ensure that the final design matches the needs and expectations of their users. 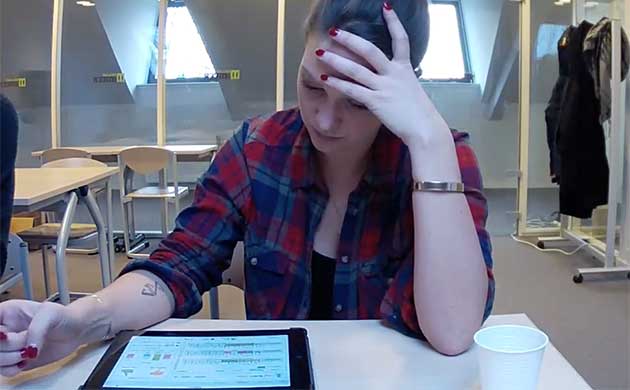 Users were involved several times during the project, either through user tests or focus groups

UXkids had a lot of fun working on this project and is happy to stay involved as a consultant during the development and subsequent pilot phase of the project.

4 reasons why users are your best advisors

Users are usually not very familiar with the technical and conceptual side of a product. Yet (or maybe because of it) they are a valuable source for feedback when it comes to optimizing your product.

UXkids is the only company in the Netherlands that is specialized in the user experience (UX) for children and teens. Do you have a question or need help with designing digital products for kids that will have a positive impact? Then let’s talk! 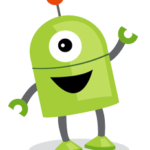 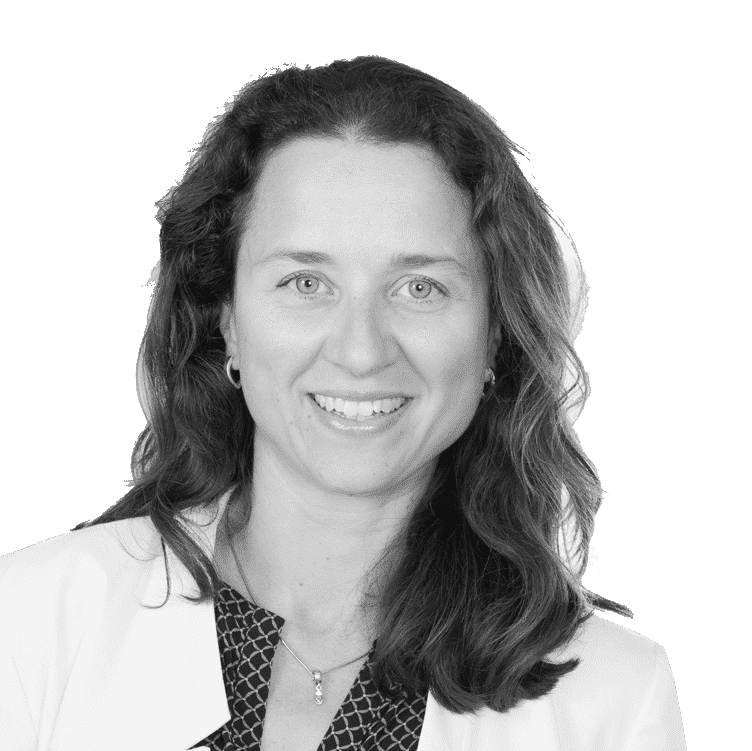 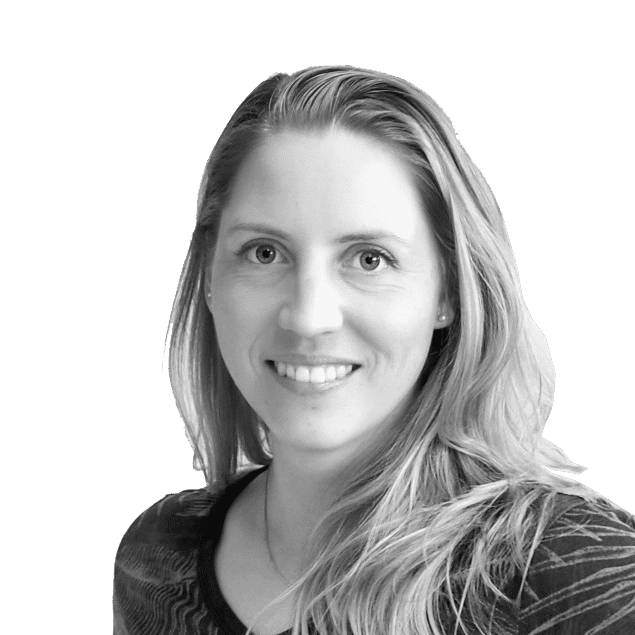